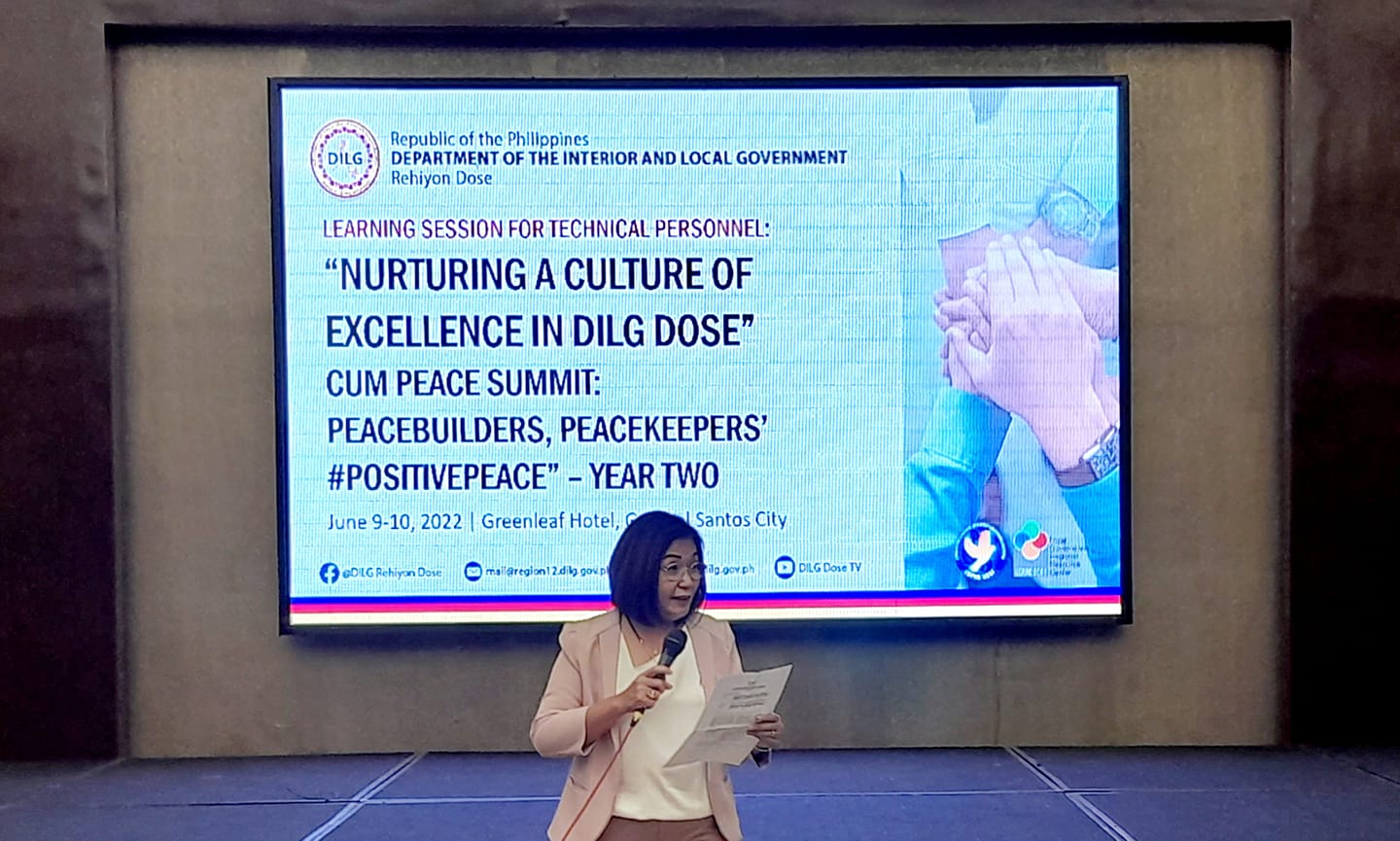 In its bid to continue pursue a culture of excellence, the Department of the Interior and Local Government (DILG) Rehiyon Dose  treated its technical personnel to a two-day Learning Session and  Peace Summit: Peacebuilders, Peacekeepers’ #Positivepeace” – Year Two on June 9-10, 2022 at the Greenleaf Hotel, General Santos City.

The activity was part of the initiatives of the LGRRC Dose generally aimed in scaling up the capacity and sharpen the sword of its C/MLGOOs and Provincial and Regional Personnel on the various P/A/Ps implemented by the Support to Local Governance Program for FY 2022.

In her message, Regional Director Josephine Cabrido-Leysa, CESO III emphasized that the series of Learning Sessions and the Peace Summit, DILG Dose had been conducted to purposely gather inputs from the participants and set target activities for the execution of various programs and projects of the region. Also, the activity similarly aims to redefine systems and processes, and refresh all Technical Personnel about the Department’s plans, development and ways forward towards achieving a Culture of Excellence and Positive Peace in Rehiyon Dose. Participants were also oriented on the recent Legal Opinions from the DILG, RA 11313 or the Safe Spaces Act ( Bawal Bastos Law)and DTP Analysis.

“This two-day retooling activity is our way of preparing everyone for our battle to be the Top Region the country’, said RD Leysa.

At least 120 technical personnel, including Provincial and City Directors, City and Municipal Local Government Operations Officer from the Field Offices and the regional office attended the said activity.

The First Day of the session has lined up top-caliber speakers which included Asec. Odilon L. Pasaraba, CESO III, Assistant Secretary for Special Concerns- Local Government Sector and Director of BLGS. Asec. Odi gave justice to his inability to join face-to-face by giving a spirited and lively discussion on the topic “Innovative and Impactful Leadership.”

schemes and well-packaged programs which left an indelible mark on the recipients and their partners. Along with AVPs and detailed slides, Dir. Sumagaysay provided inspiration to the participants as she shared the Powerful Ways towards Success of the DILG Iloilo Province. PD Teod admits to being relentless in her rally to gain support from the workforce of DILG Iloilo and her efforts eventually paid off.

Meanwhile, State Auditor Romeo C. Nunez, Jr., CPA of the Commission on Audit Region XII discussed the powers of the COA, Audit Criteria on GAD its Audit Approach, sprinkled with actual examples regarding auditing matters and how he dealt with them. He was able to clarify various concerns raised by the participants during the Open Forum segment of the lecture. He also provided pointers to the participants, along with real-life stories on how issues were resolved, especially on matters related to GAD.

On the second day, participants were given a glimpse of the Best Practices as they listened to the presentation of speakers from the provinces of Cotabato and Sarangani during the ‘Peacebuilders, Peacekeepers Forum’, which was joined by the Provincial ELCAC Focal Persons and some Local Chief Executives in the Region. The success stories of numerous speakers, starting with the interesting and colorful life of a former NPA rebel –turned-Army corporal gave the participants a first-person perspective about the deceptive propaganda used by the communist terrorist group (CTG) CPP-NPA to brainwash their recruits.

Aside from the NPA cadre, a top-ranking member and former spokesman of the Far South Mindanao Region guerilla front of the CPP-NPA shed light on the various approaches used by the rebels to counter government actions. He now works for the government as a consultant and he has been using his inside information to preempt and deter actions of the rebel group which could negatively affect the government’s efforts like the SBDP- Ending Local Communist Armed Conflict (ELCAC).